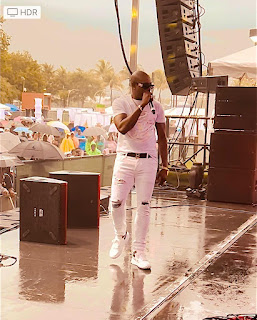 After giving an impressive performance at the recent Memorial Day, Best Of The Best Music Festival held at Bayfront Park, Miami, singer/songwriter Marvin Binns dropped a music video for his sizzling hot club banger, "Let's Get It On" produced by Xpression Entertainment label.
Marvin Binns who was this year's opening act first thanked the huge Best of the Best crowd who waited patiently in the rain, sheltered under umbrellas for coming out, "mi rate this" he concluded then launched into his short 10 minutes performance. Singing his single, Don't Hold Back, Marvin engages his audience and the ladies responded. He also sang his popular rendition of Ben E. King's, Stand By Me all-time hit, and had the crowd singing along with him. Marvin Binns did not disappoint his audience.
"Let's Get It On" music video came a few days later after that show. According to the producer, Bulby Xpression, while driving with his wife and listening to the riddim juggling, two years after releasing the song, she confessed Marvin Binns, Let's Get It On track, "had always been her favourite and sounded better each time." reiterating sentiments shared by Marvin Binns and his team since the song's release two (2) years ago.
Both camps then decided it was time to drop a video and so Let's Get It On music video was released immediately after Binns crowd-pleasing performance at the 2022 staging of the annual Best of The Best Music Festival that he was advertised to perform.
"Let's Get It On" music video is not dissapointing either, Marvin Binns female counterpart model, actress and, Nick Cannon's Wildin Out Supporting Act, Simone Henderson is giving subtle sexiness as the two cuddle and dance together creating a vibe that blends well with the song. This sultry club-banging song is once again re-introduced to music lovers with a brand new video on Marvin Binns YouTube channel and is a must watch! All music lovers are invited to log-on, comment, and subscribe to the channel. Remember also to click the notification bell in order to be among the first to receive updates when Marvin Binns goes live on YouTube