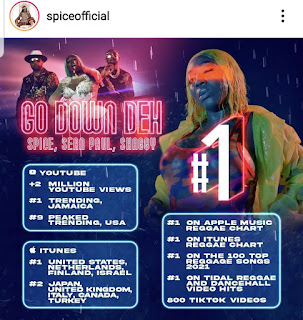 On the brink of the world's re-opening from the devastating effects of the 2020-2021 COVID-19 pandemic, Jamaica's Queen of Dancehall, Spice, hit with a major collaboration entitled, "Go Down Deh" featuring reggae/dancehall superstars Shaggy and Sean Paul. The song trended at Number 1 worldwide for a week up to the time of this publication making Spice the first female Dancehall artist in recent times to hit this milestone. Interestingly, Go Down Deh surpassed all odds in the midst of a plunging reggae/dancehall music industry that has suffered a major setback over the past year. Both Shaggy and Sean Paul are also enjoying this major success but have whole-heartedly been more supportive of their female counterpart.

The Jamaican music industry has suffered insurmountable trials over the years but, to date, the effect of the pandemic is probably its greatest test. Like hope, Spice 'Go Down Deh' song featuring Shaggy and Sean Paul has turned the tides (at least for her) when a whopping 5 million and counting video views in a week, plus chart-topping iTunes Reggae, Apple Reggae Top 100 Songs, Tidal Reggae and Dancehall chart reflect, Dancehalls' sustainability. Go Down Deh forms part of her upcoming album which is reported to be executive produced by Shaggy via VP Records. 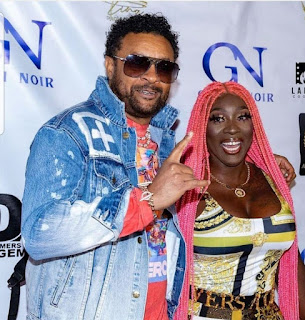 This hit song by Spice is one for her personal catalog of major hits. She is popularly known since coming into the business for racking up hits such as, Fight Over Man, Rampin Shop with Vybz Kartel which hit Billboard charts in 2009 and So Mi Like It which garnered over 100 million video views. Spice continues to push the envelope touting her entrepreneurial skills with the launching of GraceNoir clothing line, SpiceJamaica Restaurant and, is also known for her role in VH1's Atlanta, Love, and Hip-Hop reality series among other business ventures. She recently revamped her US team adding dancers, public relations representatives, vloggers, stylists, influencers/socialites, and more.

Grace 'Spice' Hamilton has cemented her name as an achiever in the local music industry and her interesting story of perseverance, determination, and drive must be told here to stimulate the ambition of those to come.