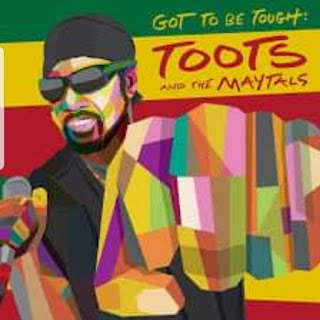 The late Toots Hibbert is 2021 recipient of the Grammy Award for Best Reggae Album and the tributes have once again started pouring in. Toots, "Got To Be Tough" album snatched the coveted prize over nominees, The Wailers, Buju Banton, Skip Marley, and Maxi Priest, at the 63rd annual Grammy Awards, held March 14th, 2021. Freddie McGregor in his congratulatory post on Facebook said, "Toots my brother, you're a true Reggae icon, you've gone too soon! I wish you were still here to celebrate this great achievement with the Reggae community."

In other posts/tributes, Steven Cat Coore wrote, "Yes my brother, for the FOUNDATION, for Jamaica, forEVER we love you."

For Shaggy's post, he commented, "the only thing better would've been him (Toots) being here to collect and celebrate his win. Well deserved."

From his Twitter page young Skip Marley tweeted, "Bless up Toots and the Maytals on di Grammy win. Di whole foundation of wah wi ah do now is thanks to dem man deh, dem pinnacles of reggae music. Nuh only reggae, blues, funk, soul, energy him bring, everything. Nobody nuh does di stage like Uncle Toots."

In acknowledging the achievement a post from Toots and The Maytals Twitter page read, "Very honored to have Got To Be Tough win the Grammy for Best Reggae Album! A very special way to remember the legacy of Toots Hibbert! We are very grateful to everyone who helped make this happen." #Tootsforever

Both late great reggae icons Bunny Wailer and Toots Hibbert were acknowledged in a  Musical Remembrance tribute at the Grammy ceremony. 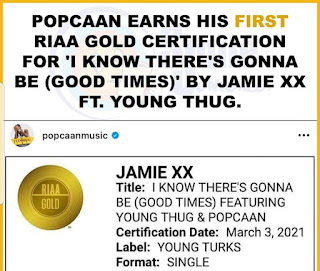 Spotify's 2020 second most-streamed Jamaican Dancehall artiste Popcaan has another big milestone to celebrate certifying GOLD by the RIAA for I Know There's Gonna Be (Good Times)' by Jamie XX ft. Young Thug. Just three months into the new year and Andre 'Popcaan' Sutherland's career continue to strive on an impressive path that has lead to his success between 2008 and 2014 when he signed with Mixpak Records and released, Where We Come From album. Recently he gave us a surprising performance when he appeared at the Beres Hammond Virtual concert performing their single God Is Love and we watched Rihanna vibing to "Silence" one of his biggest tracks from Where We Come From album.

In other news,  Veteran singers, Beres Hammond, Freddie McGregor, Beenie Man, and Marcia Griffiths have been inducted into the Young, Gifted and Black (YGB) Caribbean Music Entertainment ICON Hall of Fame in New York in recognition of Black History Month 2021. Freddie McGregor on acknowledging the award said, "Once again, I am extremely gratified on receiving the 2021 Caribbean Icon Hall Of Fame Award from YGB." 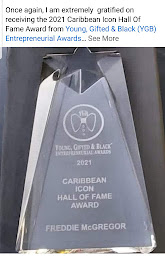 Carl Gray, president YGB, said the ICON Hall Of Fame was established to memorialize trailblazing individuals in their roles as historical members of their culture and of society. Carl Gray founded the YGB awards in 2006 in honour of Black History Month, and since its inception, the awards program has grown in prominence and is now a civic event with significant importance in New York. The program attracts public and private sector leaders who have local, national, and global appeal. The awards provide peer-to-peer recognition of "Unsung Heroes & Heroines for the Talent, Ambition, and Achievements towards the Continued Pursuit of Success in hopes that their stories will inspire others towards achieving their goals.

Both Beenie Man and Bounty Killer will benefit from the "Sale of Verzuz" the musical battle recreated by Swizz Beats and Timbaland during the pandemic that attracted millions of views across social media. According to reports, the Jamaican Dancehall icons are among 43 creatives with an equity stake in the Triller Network acquired by Swizz Beats and Timabaland's Verzuz Platform. 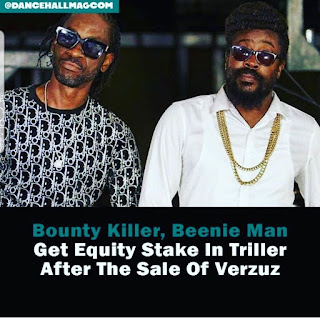 The American ace producers have now become members of Triller Network management team but did not forget to show their appreciation for the artists that took part in the Verzuz battles and who helped them to build a successful and sought-after brand.