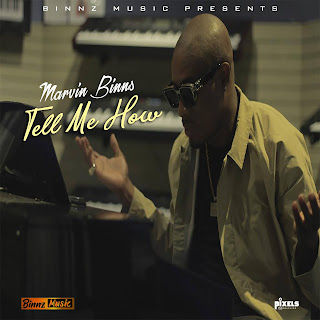 Since his re-emergence on the music scenes in 2019, Jamaican recording artist Marvin Binns recorded and released a mixture of reggae and dancehall music fusions to reassert himself in the music industry. Almost two (2) years in, he has taken the decision to stick with his own -- Reggae. I use to think I needed to fuse reggae with other genres and even tap into recording music in genres I personally love to make it more appealing to the fans. On this subject, I have had some interesting discussions too with colleagues but found myself having great admiration for the likes of Chronixx, Protoje, Lila Ike, and all the other Jamaican artists who are younger than I am for sticking it with reggae, fighting the odds and getting the attention they deserve." It's a tough fight sometimes but when they win they not only win big, they stand out!

For the year 2021 and beyond Marvin Binns seeks to captivate the hearts of all the supporters of authentic reggae music, as well as, join the list of proud Jamaican artists who are comfortably recording and striving to keep the genre always appealing to a younger audience. In keeping with such plans, he released his first track of the year called "Tell Me How" to a pleasantly surprising reaction.

Tell Me How, is a cover version of Snoh Aalegra's popping single, Dying 4 Your Love. It is relatable and trendy but when asked why he chooses a cover to make a statement here's how he explained it, "as I contemplated going all out reggae, a friend suggested that I should cover this particular track and once I hit the studio and started recording, I knew! There's a sense of belonging like it's mine, this is my genre, my music I identify with! This is really who I am and who I'm supposed to be."

Though early in its introduction, the signs are favorable toward this latest song, 'Tell Me How' and Marvin Binns intends to stick with its reggae concept while making improvement whenever necessary. "I recently sat down to watch an inspiring interview with Damian and Steven Marley, Onstage with Winford Williams, and realize my music also has to be about purpose. I am a proud Jamaican, if other artists in other countries love and appreciate my music the way they do, and has successfully made a career out of it then my greatest challenge would be to prove to myself that I have what it takes to become successful doing my own music too."

Written by: Sophia McKay
NIPnews
Email ThisBlogThis!Share to TwitterShare to FacebookShare to Pinterest