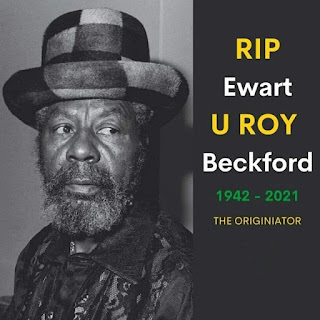 As tributes pour in and news of the passing of his death trends across social media we at New Image Promotions would also like to pay full tribute to Ewart Beckford O.D., Daddy U-Roy, The Originator, September 21, 1942 - February 17, 2021.

The Jamaican Dancehall DJ Pioneers' musical journey began in the early 1960s. Inspired by Winston Cooper, aka Count Matchuki, also a Jamaican deejay in the era of Ska, Daddy U-Roy released his first single, 'Dynamic Fashion Way' back in 1969. In 1970, he went on to release, 'Wake The Town' and 'Wear You To The Ball' and would have established his reputation as The Originator of toasting over a micro-phone in Jamaica as a form of musical expression. This musical expression created by Daddy U-Roy became known as Dancehall deejaying which was subsequently introduced in the Bronx, New York by Clive Campbell aka DJ Kool Herc, a Jamerican DJ accredited for originating Hip-Hop music in the Bronx through his Back To School Jam in the 70s. Daddy U-Roy changed the paradigm when he recorded the 'Version Galore' album. His music and style garnered a huge following in the UK as he essentially paved the way for many deejays to become the Godfather of Dancehall and Hip-Hop. In 2007, Daddy U-Roy was awarded the Order of Distinction from the Jamaican Government for his contribution to music.

On behalf of us here at New Image Promotions we extend our condolences to Daddy U-Roy's family, friends, fans, and our colleagues in the Jamaican Music Industry. Rest Well Our Jamaican Legend, Ewart Beckford aka Daddy U-Roy, The Origination, September 21, 1942 - February 17, 2021. R.I.P.