"Prophecy" The Sounds Of Color" by Jah P 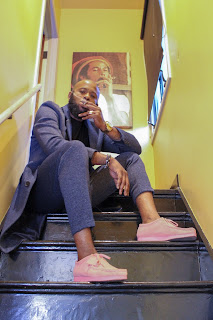 Jamaican born Hip-Hop/Reggae Independent artist Jah P launched his official music career with the release of his debut single entitled, "Prophecy" on January 10, 2020. The track dedicated to his late father, Barrington Gray encourages people of color and various denominations to call on God in whatever name or language in these troubled times, because "he loves us all, just the same."

Jah P resides in Los Angeles, California, and is musically inclined. His background can be traced back to growing up in Jamaica where he was always "in and around the company of popular artists and musicians alike." His father (an unsigned singer) a natural music lover could always be heard singing and listening to his favorites artists, the likes of Dennis Brown, Ken Boothe, Bob Marley, Alton Ellis, Junior Reid, Bob Andy, and Gregory Isaacs, (some of whom were his personal friends). Remembering his Dad, Jah P said, "music puts the warmest smile on his face" and of course, Jah P is also energized by the sounds of music. Living, in the tough community of Waterhouse in Kingston, Jamaica with family members like his cousin, Suku, a well-known producer, and artiste, member of one of the longest-serving Jamaican Dancehall bands, Ward 21, lived close in proximity to the studios of King Jammys, Jah P personally witnessed the making of some of reggae and dancehall all-time hits of the 90s.

After migrating to the United States at age 20, Jah P would soon realize he would have made his home in the heart of America's music and entertainment industry, Los Angeles. Already an ardent fan of Hip-Hop music when he lived in Jamaica, he dreamt of seeing/meeting some of his OG's whom he would constantly listen to on his boom box and the most precious toy growing up as a boy. He recalled, "man when I listened to hip-hop music then it could be heard miles away in the neighborhood of Sterling Castle, Red Hills where I first lived during my early years. The music of Jay-Z, Mobb Deep, Scar Face, Outkast, Good Mobb, Redman, Keith Murray, Old Dirty Bastard, Wu-Tang Clan, Tupac, Biggie Smalls, Eric Sherman, Smith, and Wesson blasted the air. I've been listening to these cats even before they became an item."

When asked why he waited so long to release a track, Jah P said, "time is the master, nothing was stopping me, I guess it just felt right when my father passed. I told my Dad I was gonna sing this song and we laughed about it you know. We wrote it together."

Jah P is also a Chef and the founder of his Moss Up healthy drinks a business he almost single-handedly created and launched promoting the benefits of consuming the main ingredient, sea moss. Like a new craving, Jah P Juices are quickly growing in demand and come with a satisfying taste, plus fruity strawberry, blueberry, mango, and natural oats flavors!