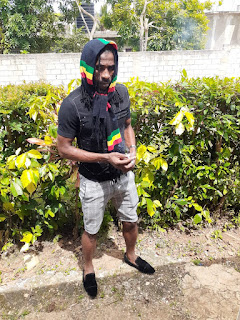 Always connecting with veterans, Sativa D Black 1 recently shared a video of himself the veteran reggae artist Admiral Tibet recently when they both got stuck in a bar in Old Harbour, St. Catherine. "Is a joy to run into an artiste like Admiral Tibet whose powerful lyrics from the 1987 King Jammys produced, hit song, Serious Times, resonate with the times from then until now," Sativa said.

As Sativa and friends enjoyed a drink, they kept themselves entertained during the heavy rains which lashed the island leaving serious and catastrophic damages from flooding. The artists sang some of their favorite tracks and asked the veteran to sing something too and he did, watch!

Sativa D Black 1 hinted that he had been working on his debut album and even posted videos of himself in the studio with Turbulence and Teflon. We know he had announced a timeline earlier in the year that the album would have been released earlier but was reliably informed by his Manager, Charmaine Bailey that, "the pandemic has set back all plans relating to an album release date even though it is being worked on,"

Meanwhile, Sativa keeps his social media base entertained and informed by sharing cameo videos of some of the various activities he has been undertaking during the pandemic that has kept him active, fans can visit his social media pages @sativadblack1 to follow up.