Rugged and Deadly Album is Here and Worth the Wait 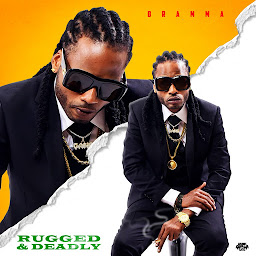 In an article written by Jamaican Entertainment Editor Kevin Jackson, published Friday, September 11, 2020, for The Jamaica Observer Splash, Bramma, Mr. Rugged, and Deadly speak of his debut album, why it has been so long in coming, what the album title signifies, his personal journey prior to the release and the kind of work that went into it click to read Collaborations with Freddie and Stephen McGregor, Mojo Morgan (Morgan Heritage), upcoming artiste Zagga, Luciano, and Anthony B, the Riddim Force Executive Produced Rugged and Deadly album is more than expected and the type that grows on you.
When Bramma hit the music scenes with a track called "Heading To The Top" he was younger, fresh on the scenes, and excited about popularity. He made an imprint which leads him to explore the Jamaican music culture, then several years later, creates an album that pretty much sums up his experience over the years and the direction in which he now chooses moving forward.
Rugged and Deadly album is almost perfect coming from Bramma, with quality production, collab choices, expression, and arrangement, it is right to say this independent reggae/dancehall artiste has done well putting out this project.
The sixteen tracks, three skits, and four music videos already released depicting a clear storyline can be enjoyed by all demographics of roots, rock, reggae music fans. Freddie McGregor, Anthony B, and Luciano adds depth to the arrangement of the album, with Freddie and Anthony B embracing today's Dancehall. On the other hand, Mojo Morgan and Stephen McGregor engage Bramma in conversations on social, topical issues. The African continent must be mentioned in any conversation having to do with black lives which is the vibe behind 'Africa' featuring Luciano, and of course, whining down, Bramma is off on a 'Sensie Ride' closing out with Zagga on "Wi Deya."
Rugged and Deadly is quite the album, and sits well among the other impressively entertaining albums heard so far this year. Jamaican reggae and dancehall artistes have stepped up their game. More time and effort is being put into production, content, expression, and creativity where needed, complemented by some exciting fusion of other music genres that intertwines with the original late 70s through 90s reggae and dancehall signature sounds. Listening one whole podcast of female dancehall or reggae artistes only, irrespective of content is a stepping stone for the music. Reopening the music entertainment industry is looking more and more prospective while, Bramma's Rugged and Deadly album is poised for breaking yet another hardworking entertainer from the local industry.
#NIPnews
Written by: Sophia McKay