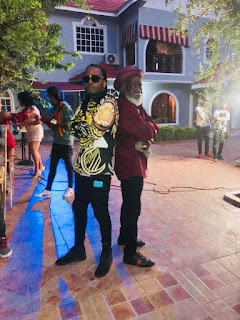 After hitting Number One on the Japan-based More Fire Radio chart and receiving rave reviews for his single, Jamaican recording artiste Bramma G.G.O.D. has teamed up with Big Ship Captain Freddie Mcgregor on the remix of the Riddim Force Records produced 'Big Chune' single.
Obviously earning the legendary singer's respect, Bramma went even further releasing behind the scenes footage from the making of a video for the single with himself and Freddie McGregor.
Big Chune remix forms part of Bramma's promised, Rugged and Deadly album which also features Anthony B, Luciano, and more. Three singles have been released from the album so far, namely, Belly A The Beast, Dancehall Rock featuring Anthony B, and the official Big Chune respectively.
NIPnews has learned that there might be yet another single(s) release from the album before it's the official release and according to Bramma, "songs released will not make the album less interesting as there are other special features to come."
Fans and music lovers are reminded to follow Bramma on social media @brammggod and
@brammaggodofficialupdates for the latest news. Rugged and Deadly album is produced by Riddim Force Records and distributed by VPAL Dancehall.
#NIPnews
written by: Sophia McKay