Clash of the titans!
It was truly a historic and awesome moment in time for Jamaica music culture and Dancehall legends Bounty Killer verzuz Beenie Man who represented themselves in another memorable and timeless clash. Reminiscent of their 1993 musical confrontation live on stage 'STING' greatest one-night dancehall event but, void of expletives and, certainly appealing to a large audience, bigger and better than the two might even imagine they could have drawn.

The two, obviously have out-grown their differences as Bounty Killer stated, "pon stage we war inna life we par," and had the over four hundred and eighty thousand views locked-in on Instagram live throughout the entire proceedings. 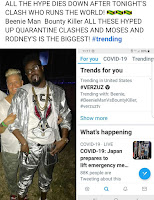 A clash that was exciting, fun, and friendly once again placed the Jamaican music industry in the spotlight and looking real good. The clash which trended on twitter attracted the attention of celebrities such as Rihanna, Swizzbeats, DJ Khaled, Erykah Badu, Ashanti, Ja Rule, Busta Rhymes, Dwayne Wade, P. Diddy, Timbaland to name a few, as well as popular music news sources such as BET, The Source and Vibes Magazines, Angella Yee, Charmalagne Tha God, DJ Envy and so many more, cheering the Dancehall legends on.

Another Great Loss For Music 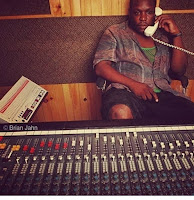 Another reggae music pioneer, studio engineer, and producer Bobby Digital has passed. His death is yet another great loss to Jamaica's music industry. Several pundits remember Bobby Digital, a few of which we thought it fitting to share as we remember and pay homage to the former highly respected music Producer. Sleep in peace Bobby Digital (S.I.P.). 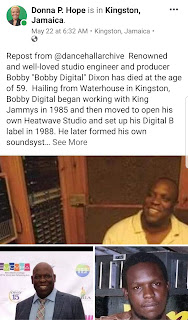 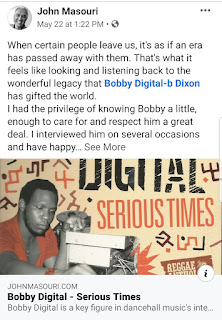 Music Journalist and author of the book Rebel Frequency, John Masouri also shared a post on FaceBook, "when certain people leave us, it's as if an era has passed away with them.." 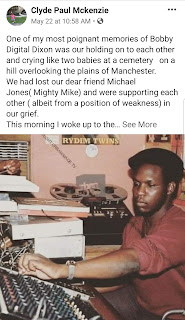 Clyde McKenzie remembered Bobby Digital his friend, "holding on to each other crying like two babies in a cemetery on a hill overlooking the plain of Manchester. We had lost our dear friend Michael Jones (Mighty Mike) and we're supporting each other .....

One of Bobby Digitals' most outstanding projects from then until now and will forever be for this writer is the album ''The Real Thing" by Sizzla Kolanji. Sleep In Peace Bobby, gone but not forgotten