2019 Highlights Crazy and Historic Moments on the Jamaican Music Stage 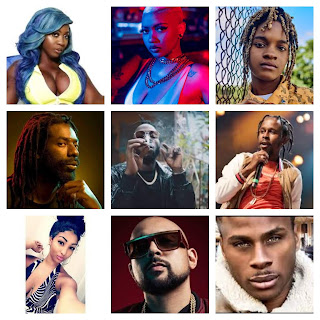 It's a new year and we are grateful to be alive, 2019 has been one heck of a year. So much has happened, the struggle, uncertainties even milestones missed all make the music industry what it is. While the year had its moments of disappointments we witness some really good stage moments worthy of highlighting so without further ado lets get in.


Buju Banton Long Walk to Freedom concert must have been the most intense music moment on a stage in Jamaica. As the momentum built ahead of the event we felt as if history had repeated only with a slight twist (click to read what we envisioned) but as it turned out, history was created, a moment like no other, Buju Banton's performance at the National Stadium in Kingston, Jamaica was epic and became one of the greatest stage moments ever!

Another big stage moment last year was Popcaan's extravagant entrance on his "Unruly Fest" stage. A proud moment, simply because creatively his idea will hopefully lead to more grand stage openings among local artists. Unruly Fest continues to inspire and grow in numbers. The mass audience at the 2019 staging witness a somewhat downplayed truce between Popcaan/Masicka and Popcaan/Beenie Man. Moments like these have to be highlighted to encourage more positive trends in the industry.

Little Koffee has become a giant of a Jamaican representative in music. Now the youngest female Grammy nominee, Billboard entry and even landing major collaborations and stage performances. Koffee's recent stage performance includes major African concerts and she is confirmed to perform at Coachella in the United States joining her proteges, Chronixx and Protoje as the only Jamaicans to perform on that stage in recent years. Watch the moment in time 2019..Koffee live on Buju Banton' Walk To Freedom

As fellow female artists follow suit we saw the princess Shensea excel. She landed a major collaboration with American hitmaking Rapper Tyga that sparked a bit of controversy but excited her fan base. Her live performance game swelled but hot on her heels came the young 'heavy' Jada Kingdom and a persistent D' Angel entered the ring with greatly improved stage-crafts that ended their year satisfactorily.

Jada Kingdom's undeniable talent was never in question and although this writer is not a fan of too much a raunchy performance one has to admit that she improved her stage game over the year as was promised. Another female artist who has noticeably improved her stage performance is D'angel the self-claimed dancehall first lady. D'Angel has stepped up her game on stage to very good entertaining levels, a hard worker who was always persistent and eager to learn.

Well, Dexta Daps or, Mr. Dexta Daps has the ladies literally losing their minds and this writer's eyes popping at some unimaginable outcome at his live shows. Social media get busy every time which is really necessary for entertainment. He might have even gotten some of the ladies in serious problems with their other halves but this too delight fans. Dexta's stage game is totally lit and audience 90% females (possible not an accurate figure) is indeed a fact that more females attend his shows than males.

Might not be the craziest stage moment of the year but definitely crazy enough to end it was Sativa D Black 1, Fantan Mojah, Turbulence, and Bluugo speedy performances at Iba Mahr's annual Sound Di Alarm show. The event that has also grown in the number of attendees saw artists bomb-rushed the stage in a bid to get a piece of the action before the authorities brought the years' staging to a close check it out below:-