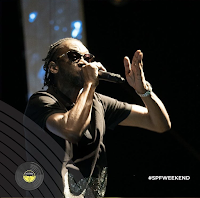 Bounty Killer's performance at FullyLoaded 2019 is a reminiscence of his 90s prowess as the Lion King of Dancehall.

Quick to add, however, while this trait was never lost within him but more so within the minds of a younger generation of Dancehall fans, presiding over that Fullyloaded crowd and showing them what a Legendary dancehall artist should possess then lead them in the direction he should display at this point in his career is clearly a pathway define, by a King. BOJTV caught it live!


Japanese sound Mighty Crown also delivered a memorable set at Fullyloaded 2019, opening with a string of neo-roots selections. Since the re-emergence of neo-roots or roots-reggae music by Chronixx, Protoje, Kabaka Pyramid, Jessie Royal among a selected few, neo-rootical dancehall music has evolved into a trendy crowd-pleasing sub-genre. Borne out of the 80s era of the great Brigadiere Jerry and Sista Nancy among others, the balance created a sense of newness to the show.

Dancehall has a specific sound, carries a unique vibe and is highly intensive and contagious. It is what it is void of a certain culture and cultural practices that can never co-exist.  Within the genre those who understand it would have also observed the difference in artistry among other great dancehall artists over the years. And indeed, there are several pathways to the crown. Different styles, vibe, skills, and input coupled with dancing, sexual and explicit contents, hardcore, roots, and social commentary all make it what it is. But the key to sustaining its authenticity is in keeping with its roots. These traits and collaborative effort created by its founders have made dancehall a unique brand that will forever stand out in a crowd.

The re-introduction of the Solid Agency produced Fullyloaded 2019 event is a staunch reminder of Dancehall in the element. There's always room for improvement and overtime, stringent rules already implemented should take root in order for elevation to occur in this authentic form. Arguably, Fullyloaded 2019 made an impressive comeback and have set the trend for sound systems music festivals onward.