Krvcialggod Clean to his Step for Debut Performance at DanceJa Recently 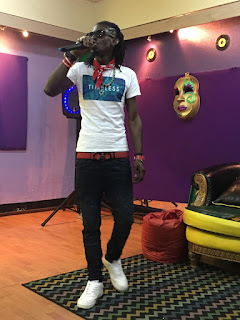 Krvcial who landed a feature in the Jamaica Star recently and expressed his confidence in making it big due to the musical influence he has around him, also promises the release of a mix-tape which he told NIPnews is still being worked on as he continues to promote, "Rocket" a track off the Silent Ocean riddim produced by G3k Music Production and released earlier this year.

The self-claimed non-traditional Dancehall/Reggae artist embarked on his musical journey while attending St. Andrew Technical High school between 1997 to 2001. An ardent music lover he found himself flipping lyrics of icons Bounty Killer, Spragga Benz, and Mad Cobra to the delight of those who heard him.

Krvcial recalled being told he had some 'crucial' lyrics hence his name which was intentionally spelled "Krvcial" to be different.


Throughout his career span, Krvcial has recorded tracks such as Have Dis and Man A Gorilla,  G.G.O.D. featuring Bramma, Yuh Life Sort Out, Tek Nuh Talk and Jah Guide and "Kill Dem" featuring X-Files. Go follow @krvcialggodalmighty on Instagram for updates on the promising dancehall artiste.