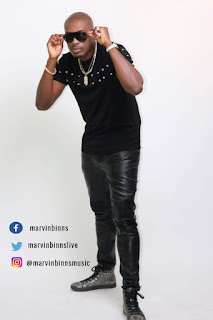 Jamaican contemporary Dancehall artist Marvin Binns has embarked upon a re-branding process and has relaunched his career at the beginning of 2019 with new singles for the ladies showing off his smooth, sultry, melodious voice.

No stranger to the industry and bouncing back after a two year hiatus, Marvin Binns  sought to remind music fans of his journey before, "I was mostly doing openings for popular Dancehall artist Kranium in the states and other artists across the Caribbean" he told NIPnews.

Back now with singles "Nah Come Soon" that got Miami's 99 Jamz DJ Waggy Tee and BBC 1xtra Seanie B rotating on their sets respectively, a collaboration with Dancehall artist Lockit on a single called, "Say What," the remake of Donell Jones 1999 "Where I Wanna Be", "Waistline" another single produced by Kingston City label and a steamy hot follow up video for the Kevv Star label produced, "Nah Come Soon" now on Youtube, Marvin charts his course.

The 5ft 9" almost perfectly built father of two, is excited about performing for the ladies. A big fan of Chris Brown whom he met and had the pleasure of taking a photo with a couple years ago, Binns hope his music resonates with not only a Jamaican reggae/dancehall audience but the American hip-hop and RnB audience in like-manner as Chris some day, "it's important to be loved and appreciated, even more so for the display of raw talent" he said. "so I want my fans to feel the same way Chris's fans feel about him, the love is real." Marvin Binns music career is on a path intended. He has also ventured into acting and plays the lead role in a few series of the Jamaican movie, Born Bad "now this is a real challenge for me but I'm loving it. I don't want anything that dont belong to me but for everything that does I want it all" he said.