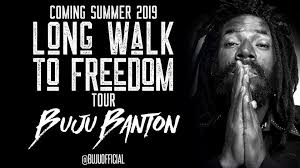 Will Buju Banton's concert in Kingston on March 16th unite Jamaicans in the spirit of  patriotism? Will Jamaicans at home feel "purged" and inspired?

After being incarcerated for so many years one get the impression from just observing the gargamel in front the camera, that he is a changed man. His whole persona seems electrifying and judging from his music and no nonsense approach performing live, Jamaicans indeed might just witness the most intense live concert held in Kingston since 1978.

Music, live reggae music in it's purest form is therapeutic. It's been years, more than 10 years since, Jamaicans and their Caribbean neighbors who have been entertained to the full extent, by every genre and sub-genres of dancehall, soca and reggae music, placed on high-alert in anticipation of a concert of the magnitude promised by Buju Banton. Not only is production expected to be exceptional in an era where technology is seemingly limitless, but the performance/s should be like no other roots-reggae concert held in Jamaica and emanate an energy that inspires and motivates. At the very least the Road To Freedom concert promised, should be as significant as the historic "One Love Concert" held 1978 where the legendary reggae king Bob Marley brought political rivals the Honorable Michael Manley and Honorable Edward Seaga together as a peace initiative.

One good thing about music, when it hits you feel no pain. The One Love Peace concert attracted more than 32,000 spectators, brought together 16 of reggae's biggest acts and was dubbed by the media  as the "Third World Woodstock." The concert was said to have been conceptualized by two gangsters, (Claudius "Claude' Massop (JLP) and Aston 'Bucky' Marshall (PNP) both men shared same jail cell and wanted to alleviate violence in the country so they figured that the best means of initiating peace was to use music as a uniting factor. This writer believes the event's production team Solid Agency and Rockers Island is capable of pulling off such a feat but, the outcome of what could be Kingston's biggest roots-reggae concert ever is left to be seen March 16th, 2019.

Wherever you are in the world, if you love reggae music and is a fan of Buju Banton but have never experienced the authenticity of this great music on Jamaican soil, this is your opportunity. Make it a date, visit Jamaica and enjoy Buju Banton and Friends Live for the first time in 10 years on The Road to Freedom!