Kabaka Pyramid Calls For The Break Down Of Borders On New Single "Borders" Feat. Stone Bwoy 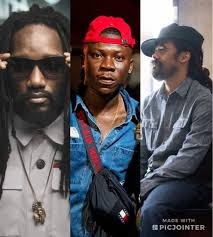 Following the release of single, "Can't Breathe" Kabaka Pyramid is set to release another entitle, "Borders" from his upcoming debut album, Kontraband.

The voice of Kabaka Pyramid is heard almost in a plea for change in breaking down borders and unite as one nation, "...Each human being deserves a place to call their own, yet so many have to journey far from home, little children in the darkness all alone seeking freedom, it's about time we break those borders down, there's too much segregation we're all a part of one nation."

According to a release, Kabaka Pyramid draws inspiration for this song from the ongoing refugee crisis around the world. However, sounding his voice on those issues is to enlighten and bring awareness to the masses, "I wanted to do this song because we as human beings need to do something about the refugee crisis around the world. It's a shame to see the level of separation displayed by governments and people when now is the time for unity. I also wanted to connect with my African family so I'm grateful that Stone Bwoy could lend his voice to the song and vision. We're looking forward to big things this year and this song is the way we wanted to start it off!"