You thought we scrapped this? No not at all. Our Reggae/Dancehall and Other Music News Highlights continues. Not having much to report in the first few months, we decide it's best to put together what we have over six months. This entertainment news feature is designed to bring you highlights of the most significant and/or historic music news to unfold over the period by Jamaican artistes so here's what we have:- 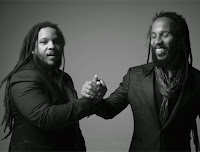 Marley's sons. Varvatos believes that Stephen and Ziggy are just as iconic as Marley himself. click to read more

February - Eleven Jamaican artistes identified as "Acts keeping Roots Reggae Alive" by MTViggy. "The music vibrations coming out of Jamaica has firmly tilted back in the direction of roots reggae and other conscious expressions..click Jesse Serwer MTViggy

March - Chronixx Capture Land Tour Jamaica leg marks the first ever successful tour by a local artiste across Jamaica in twenty years.  The Kingston leg that was held on the grounds of Jamaica College  attracted huge crowds more

April 8 - The historic visit of the President of the United States of America, Barrack Obama to the Bob Marley Museum in Kingston Jamaica.  President Obama made the visit his very first stop before any official meetings 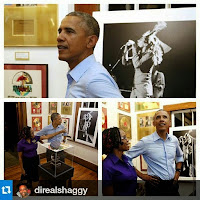 April 20 - 4/20 marks the first International Peter Tosh Day. Observe by weed smokers, 4/20 was launched as a celebration honouring the legendary reggae artiste, musician, human-rights-activist and advocate for the responsible
consumption of marijuana for medicinal and spiritual health benefits more

May - June Omi became the first Jamaican artiste to hold the UK Pop Chart #1 spot for four consecutive weeks more
He enters the top 10 of the Top 40 and Rhythmic charts breaking a 12 year record held by Sean Paul for his 2003 smash single, "Get Busy."

07/01/15 Sister Carol Hit The Movie Screens
Foundation reggae recording artiste Sister Carol will make a cameo appearance in the upcoming movie, Ricki and The Flash schedule for release in August. Sister Carol will play a "small roll interacting with Meryl Streep" who plays lead roll according to a Jamaica Gleaner report.... more