Shaggy Announces the Release of His New "Out of Many, One Music" Album 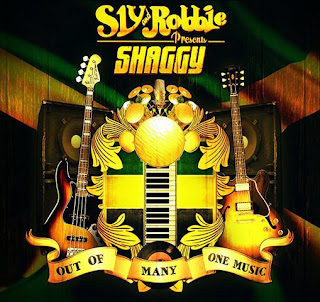 Shaggy's Ranch Entertainment label proudly announces the release of it's founder Shaggy's twelveth album titled "Out of Many, One Music," September 12, 2013 produced by legendary Jamaican rhythm duo Sly & Robbie, Sting International and co-produced by Lenky Marsden.  As one of music's highly acclaimed artist with two multi-platinum and diamond selling albums, eight number 1 hits, twelve top ten singles worldwide and a Grammy for best reggae album, Shaggy is at it again.

In a press release from the New York based Destine Media, Shaggy's "Out of Many, One Music," album is said to be inspired by deep grooves of pioneering roots reggae band Black Uhuru complemented by Shaggy's own input. "Those hard Black Uhuru drum and bass tracks with my pop style of writing and melodies added a nice twist.  I feel this album is really something solid and authentic," said Shaggy.

Lead single on the album title, 'Fight this Feeling' is a duet with lovers rock icon, Beres Hammond and is laid on a timeless Sly and Robbie rhythm, which had a positive impact on traditional hardcore dancehall this summer.  According to the release the single had DJs included more lovers rock music to their set.  'Fight this Feeling' is a modern day love song, produced by a combination of the expertise and skills of Sly & Robbie, Sting International and Lenky Marsden.

A second single released off the album titled, 'You Girl' featuring RnB/Pop star Ne-Yo is a body roll inducing love song that currently holds iTunes Reggae chart number one spot.  The thirteen (13) track album will feature other unreleased collaborations with legendary and upcoming reggae and dancehall artistes listed below.

The album is promised to give the public an opportunity to enjoy good reggae, great music production as well take listeners on a journey with Shaggy and some of his friends as they pay tribute to reggae, one of the many gifts given to the world from the island of Jamaica.

"Out of Many, One Music' is not a new Shaggy album but a collaboration between him and legendary rhythm duo Sly & Robbie and he explains, "I've been criticized for years for not being authentic because of my pop success.  People say I'm not this, I'm not that, now I'm doing a reggae album with the masters and people are saying its a game changer.  The first two singles have already proven that to some extent.  You be the judge on September 24th!"

Track Listing
1.   If U Slip U Slide (You Could Be Mine) feat. Melissa Musique
2.  Till I Kissed Ya feat. Samira
3.  Like Never Before feat. Cocoa Tea and Joe
5.  Fight This Feeling feat. Beres Hammond
6.  All We Need is Love feat. Konshens and Jimmy Cozier
7.  Money and Friends
8.  You Girl feat. Ne-Yo
9.  Deadly Love feat. Peetah Morgan and Tessanne Chin
10 Crazy feat. Damian Jr. Gong Marley and Chioma
11. Bridges feat. Chronixx
12. Trouble Under Your Roof
13. Scheming