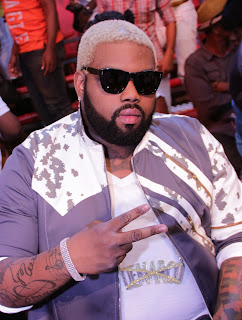 KINGSTON, JAMAICA | SEPTEMBER 28, 2013 | Despite spending nominal time in Jamaica due to his hectic tour schedules, International Dancehall superstar Demarco continues to be one of the front-runners for the genre. The blonde-haired singer last week became the first Dancehall act to grace a major concert stage in Ethiopia.

Unfolding in the capital of Addis Ababa his performance witnessed a wide cross-section of patrons many of whom were noticeable getting their first introduction to his brand of music, nonetheless the sizable gathering showed their appreciation with bountiful adulations. The True Gift Entertainment (T.G.E) recording artiste hails the Ethiopian visit as another milestone in his career and a step in the right direction for Reggae and Dancehall music.

In a statement to the media Demarco says, “The tour was great! exhausting but fulfilling nonetheless. This was my fourth time in Africa but my first in Ethiopia and Australia.”

Alluding to the state of the Jamaican music industry he intimated that, “Aside from creating my own legacy I try to use the opportunities given to me to open more doors for our music across the world, whether that means taking time out for a fan, doing an interview or simply signing a CD, I’ll do whatever is necessary. This is important if our industry is to grow and compete on a global level with other genres.”

As part of the African assignment Demarco also visited Johannesburg, South Africa conducting a media blitz to bolster his presence on the continent. The trip marks his fourth visit to Africa.

The aforementioned forms part of his ‘I Love My Life’ tour which also encompassed a stint in the French Pacific Southwest colony of New Caledonia along with a five city tour of Australia with stops in Sydney, Melbourne, Perth, Adelaide and Brisbane. [WATCH AUSTRALIAN TOUR HIGHLIGHTS]

Now back on local soil Demarco is preparing to release a triad of videos and continues to maintain a strong presence on the charts globally. His single ‘Apartment’ is currently No.1 on CVM-TV’s Hit-List; No.5 on the Choice FM U.K Reggae Charts, while his latest entry Lazy Body has jumped nine spots to No.11 on Nikki-Z Hot 20 Chart. ‘Continue Whine’ held the No.1 spot for two consecutive weeks on the Hype-TV Chart and is presently poised at No.5 on the Canadian Radio Dubplate Chart.