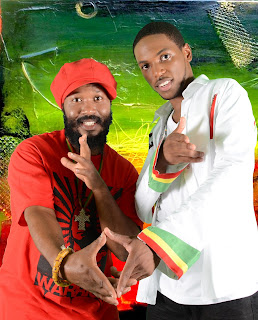 Rapper J-Rich and Warrior King's latest single, "Love and Joy" has been getting some very good reviews since it's release. One radio host believes the song, "has a good feel about it, in other words, good song, good combi with Warrior King, classic riddim to suit it." Consistent with the young Toronto native's intent of, "leaving a favourable impression on those who have come to hear" his music, J-Rich who is currently in Jamaica, has shot and released a video for the track with Warrior King and is up and about promoting it, making appearances on local television, cable and radio shows across Kingston.

This smooth Hip-Hop/Reggae song (click to listen) produced by Jam 2 son of 80s king of digital production in Jamaica Lloyd 'King Jammys" James, has already empowered a community that was divided for years in dispute.  Although not brand new, the positive vibe of this song can never be enough to transmit into the minds of those who seek this type of consciousness to carry them through their days.

As Jamaicans recognized Labour Day May 23, 2013, J-Rich will get a chance to tell a large radio audience why he choose to work with Warrior King plus so much more in a live interview on FAME95 FM.  Get up to date, Follow J-Rich on twitter @JRichto during his  promotional campaign in Jamaica.