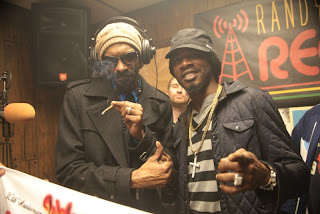 On April 19, Queens New York was graced with a live band performance by reggae superstar Gyptian who has not performed in the New York area for over a year.  Entering the stage to a mass of screaming female fans, Gyptian made sure he gave his fans their monies worth.  His encore performance of Hold Yuh pleased the crowd as he called on Ricky Blaze.

Currently working on his upcoming album titled, Sex Love and Reggae (SLR) on VP Record label, Gyptian was seen hanging out with Snoop Lion at Randy's Radio, located in Queens.  Snoop Lion who was in town for his album signing at VP Records, was greeted by a host of fans, press and members of the Caribbean diaspora.  Gyptian stopped by to show support as a member of the music fraternity and they took it to the "booth."  Watch Gyptian/Snoop Lion freestyle on Randy's Reggae Radio:-

"The energy was great, it was a joy to just spit a few lines with Snoop and create history" said Gyptian.  As Gyptian's latest single, Overtime garners international radio airplay, Gyptian shot a video for single, 'Whine' off his SLR EP.  This video was directed by KR8 Films, Royal Ras and Humbless Production and is expected to premier in the upcoming weeks.  Gyptian will shoot another video before heading off on tour in Europe, May 2nd.