#NIPnews: As Pop star Rihanna continues to share her world on instagram, one of her latest posts, a  section of an article, revealed that Jamaica's famed incarcerated Dancehall Star Vybz Kartel is the second Most Requested artiste on National Prison Radio (NPR) playlist in Britain by prisoners.  The article titled, 'Late Rapper 2Pac Tops Cell Counts' revealed that Ms 'badgalriri' as labeled on instagram is the only woman on the chart at No. 4. while 2Pac is the Nation's favourite music star....holding off Reggae fusion artiste Vybz Kartel.  NPR is available to all 84,000 inmates in Britain.
click to view 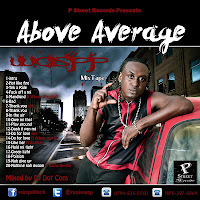 As promised, Jamaican Dancehall artiste Waspp released his "Above Average" street mix with free download for the fans.  The 17 tracks cd mix is a compilation of current release and previous releases included tracks such as Touch Off A Mi, Hott Like Fiya and Thank. Follow on Twitter @realwasp @team_pstreet @sophisnewimage and @1portiaclarke for further update #AttackAttack.

Kashu, the 'Me Nuh Waan Buss Again' Jamaican artiste Kashu rung in the New Year encouragingly with his first performance off the island.  The singer jetted off on New Years eve to St. Maatens, performed his gig then return immediately to the Jamaica in time for Moby's Talent Search in his home parish held Fridays at Moby's entertainment complex while preparing for his grande debut album launch.  Manager Ryan Singh disclosed that Kashu's 'Campaign to Campaign' album launch will be held at Moby's on January 31, 2013.  Artistes Noddy Virtue and Hezron are already confirmed to endorse the event.  FOLLOW @kashuja on Twitter

Fast rising Dancehall artiste Bramma drops a new track entitled, 'Love Off Mi' on the Animal Instinct riddim.  Bramma who was suppose to be touring Europe this month along with his Big Ship Family will not make the tour as promised as it was once again postponed until further notice.  This week,  Bramma's raving video for the track, 'Bad' once again holds down the No. 1 spot on HYPE TV video chart.  The 24 year old's music career seems as promising as it ever was at this time with every popular radio station and sound system dj in Kingston playing his music.  Follow Bramma on Twitter @bramma1 for updates.