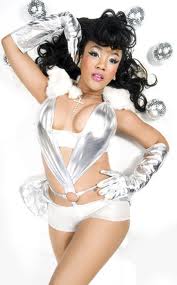 As the #catfight continues among Dancehall divas, budding Dancehall artiste Tifa took to twitter to respond to comments made by Lady Saw in a recent interview on local Hitz 92FM radio. Among some personal jabs Tifa, whom Lady Saw suggested is an, "uptown chihuahua" sought to remind the Queen of Dancehall that, "As Queen, you should be sitting on your thrown comfortably" then asked, "what example are you setting for those present and all other upcoming artistes, especially females Lady Saw, by degrading us?

Tifa who rose to prominence in the Dancehall after dropping a track called, "Crawny Gal" produced by Ward 21 then swept the Dancehall circuits with hits including, 'Bottom of the Barrel' and another Ward 21 bomb called, 'Spell it Out,' brought home four individual and shared two Youth View Awards (YVA's) to a total of six awards this year alone. Tifa rubbished rumours about her and which involved Lady Saw personally and aimed for the jugular posting on twitter, "Lady Saw you are the queen of dancehall and icon and no one can take that away from you. For that I respect you, but today was shameful."

With mounting disrespects, the #catfight continues with Lady Saw reportedly getting emotional in one interview, Spice hitting out at Macka Diamond and Macka Diamond recently dropping a track that critics say, "has hit Spice hardest."  Well as they say, "it's a Dancehall thing" deal with it or run away from it the props go to the one left standing.