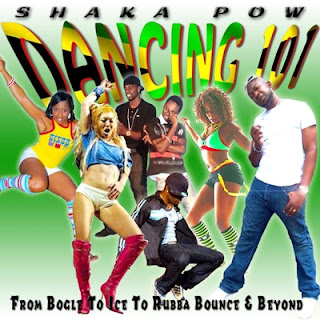 N.I.P.: Who is Swaggi Maggi, where do you live and was born?
S.M.: I was born in Germany by a Chilean dad and a German mother.  My real name is Margarita Bonning.  I moved to Berlin in 2009 and started my studies in Philology and Latin American studies.  Still my greatest passion is Dancehall and I'm teaching Dancehall classes and workshops all over Germany and Europe.  Right now I'm working with my partner Tobi on our project TopUpProduction which aims to promote Dancehall as well as the Dancehall dance more in Europe and I'm doing an internship at the School of Dance at Edna Manley College in Kingston to complete my studies and increase my knowledge of Jamaican and Caribbean culture and dance.

N.I.P. What is it like growing up in your hometown?
S.M.: Completely different from Jamaica.  Life is quite strict/regulated and quiet, most children don't grow up surrounded by music and dancing.  I was lucky that my dad was always listening to music, so I grew up with rhythm and dancing.  But after high school I felt bored in my hometown and found what I was looking for in Berlin - multicultural population and a more 'colourful' life.

N.I.P. What is the entertainment scene like in Germany, the music, dance, artistes, help us to visualize these things?
S.M. Well, we also have a lot of musicians and artists but from many different genres and it's the same with dancing.  Pop and electronical music are quite popular and these are the genres, that the biggest night clubs play.  We have many big dancing schools that offer classical/modern dances and street dances but only a few have Dancehall in their schedule.  And if so, many times the teacher doesn't know about Jamaican Dancehall steps and the culture but they do some kind of female Hip-Hop dancing to (old) Dancehall music.

N.I.P. How did you first hear Jamaican music and what was the experience like?
S.M.: The very first time surely was my mother's Reggae compilation CD and I already loved it when I was a child.  Later I went to my first Dancehall party by a local sound called Mangotree Sound System and that was when I fell in love with the music and began to dance to it, first in my own way and step by step discovering and learning more about the culture, music and the dance, exchanging also with the members of my first crew Badda Gyalore.  At the beginning this was quite hard as information via internet just started to come up in the past few years.

N.I.P.: How do people in general react to Jamaican music and is this population large?
S.M.: The population which is listening and interested in Jamaican music is unfortunately not too big, even though it is growing.  Of course, many people enjoy Reggae music and we have sound systems all over the country, keeping Dancehall parties and promoting Jamaican music, but even they are struggling.  My Dancehall classes in Berlin are growing every day as people like the music and discover something 'new' for them, refering to the music as well as the dance style.  there are mainly females coming to the classes and workshops as most of the men still think that Dancehall dancing is only for women....

N.I.P.: Interesting.  You are Germany's Dancehall Queen tell us how did that happen and in what year.
S.M.: I was holding the title from 2010-2011.  As I said, I started to get more into the dance behind Dancehall when I discovered the music.  Then I developed my dancing skills with my crews Badda Gyalore and DiW!NE so that when I entered the 4th annual German Dancehall Queen Contest I could convince the judges not only with wining skills and acrobatics but basicly with Dancehall move and routines.

N.I.P.: How significant is a Dancehall Queen title on Germany's Reggae/Dancehall scene?
S.M.: I think it depends on what you are making of the possibilities you have as a DHQ.  If you are promoting yourself, developing your dancing skills, and if you take this opportunity to promote Dancehall dancing itself as well.  I guess my title helped me to do all of this as I gained a certain popularity holding the title.  But it is not only about holding the title.....

N.I.P.: Okay so you are now here in Jamaica, can you tell us and the many persons who visits our website daily what you enjoy most on the island?
S.M.: Dancehall - of course (smiling) that I am surrounding by Dancehall music, vibe, dancers, everything...

N.I.P. How did you meet Shaka Pow and tell us what do you want people to know about Swaggi Maggi?
S.M.: A local Jamaican introduced me to Shaka Pow in 2011.  He spontaneously invited me to dance in his dancing video for 'Splice dem.'  When I returned in 2012 with my partner, Shaka asked me to do a promotional video for his new tune 'Flip Flop' out of his album, Dancing 101.  After that I just asked him if he would be interested in doing a collaboration for my dance move called, 'Top Up' and so the dancing tune, Top Up was voiced on a relick of the Duck riddim, produced by Tobi Zepezauer.  As my aim is it to promote Jamaican Dancehall and its dancers, I invited local dance crews (e.g. G-Unit, Overload Dancers, Fire Rave,...) to dance in the video to present their latest moves.  I want people to know that I'm not 'stealing' their culture but appreciating it to the fullest.  I aim to represent real Dancehall in my country and Europe to make them know about the real thing and also for the benefit of Jamaican dancers and their popularity.

N.I.P. Thanks Swaggi Maggi and we sincerely hope you succeed in your endeavours.