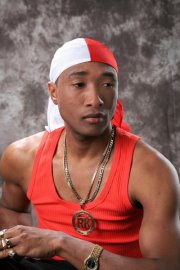 Canadian based entertainer Richard William also known as Rich Kid, was born and raised in Portmore, St. Catherine, Jamaica, he attended the St. Johns Primary and Kingston College respectively.  As a youth, Rich Kid grew up around musicians which attributes to his honing his skills in song and poetry writing.  Though he was young, he would participate in school and Sunday school events/activities exercising his dub poetry and other skills in the arts.


Rich Kid's personal motto is "Live life to the fullest, love what you do and do what you do best". He is serious about the businesses of Music, Arts, Entertainment, Film, Sports, Children and Philanthropy.
His passion for life is characterized throughout his lyrics and versatile styles of music; both Urban Reggae and Dancehall.

A young multi-talented Rich Kid, engaged in several aspects of the music industry in Jamaica that would have molded him into the entertainer he is today.  He learnt how to 'deejay or freestyle' when from having access to his cousin's sound system and would often sit with the likes of "Lieutenant Stitchie" and "General TK.  He recalled his involvement in shaping their musical careers,  instrumental in creating flows  for written pieces as well as orchestrating the outcome of a performances on a show. Inspired then, by "Lieutenant Stitchie' who later became a successful Gospel artiste, Rich Kid adhered to Stitchie's advise to continue his education, while pursuing a career in the entertainment business.

"Rich Kid" migrated to the United States where he attended school for three years, then later moved to Canada. Remembering the advise given to him by Lieutenant Stitchie while living in Jamaica, he completed his education in Network Administration, Political Science, World History, and Theology.

Focused on fulfilling his dreams, Rich Kid turned his attention to forming an affiliation with "Nite Starr" Sound System, performing at parties, weddings, stage shows and other special events before he took the decision to branch off in 2004 to focus on his own career.  Priviledged to work with major record production company in Jamaica, Anchor Recording Studios, Rich Kid form his own CG Records but continued working with independent labels such as E55 Production Records and Stumpy Production Records in Jamaica as well as  The Lair Recording Studios, Explorer Recording Studios, Slam Productions, Iguana Recordings, Reflex Studio, and Eagle Force Entertainment and Eye One Records in Canada.

Thus far the Canadian Reggae artiste has released two  two singles in 2004, “Freaky Freaky Ting" and "Penny for my Touch" on the C&G Promotion Label.  Later he released a single entitled "In The Mix", which won him the "Toronto International Reggae Music Award" for Best Video and Best New Urban Artist Video.

An entertainer who racked up more air miles than many corporate flyers. Performed  in England, Jamaica, U.S.A, Portugal and Canada, Rich Kid is motivated to now release a  debut album that will highlight his journey from the past into the future.

Though he has recorded a number of songs, many of which he believes are potential hits, special attention is paid to songs such as "What must I do," "life’s worth" and " Searching " which features many R&B flavours to be released on "CG Records"/"Eagle Force Entertainment" with the videos in the works.  This is so because Rich Kid became the Executive Producer of many rhythms created and released on the CG Recording Label, including The Mad Kick Rhythm Driven Album that comprised of nineteen tracks of some of the most popular Reggae artistes in the industry.

If you love Urban Reggae music you are guaranteed to adore this artist, as Urban Reggae has been a trend setter for many years. Rich Kid is sure to captivate your hearts and stand out in your minds as he aim to make it big the International Reggae Music Industry.