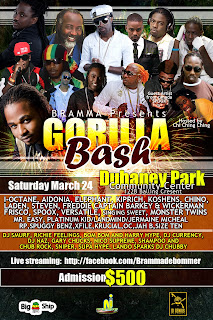 Spanish Town Hi-Tension will provide sound while very special guest Selectors, DJ Smurf, Richie Feelings, Nico Supreme, Bom Bom and Harry Hype, DJ Currency, Supa Hype, Gary Chucks, Chub Rock and Sniper will be at the controls to unleash a high energy juggling never before experience in Duhaney Park.  This event, "a go louddd!!!" the line up is impressive and the community is known to be highly supportive of hardcore Dancehall and Reggae artistes.

Bramma is on the grind, his music now in the streets are in consistent rotation. Though loyal to Stephen 'D Genius' McGregor as both have matured in this industry together entering the game as teenagers; Bramma has been working with other producers such as 12 to 12, Ward 21, long time friends Chimney Records, Supa Hype and Boardhouse Label.  The radio airwaves and Reggae/Dancehall night life party scenes are blazing with tracks like Never Worry, Pressure Dem and the super collaboration called Haters Warning which features Esco, Chino, Chan Dizzle, Ward 21, Rolling X and Bounty Killer and produced Esco.

'Bramma's Gorilla Bash' is designed for sheer entertainment in the community.  'Duhaney Park people love Bramma so me waan share wid dem enuh, an me glad dat me friends dem decide fi support me so the show ago shat" said Bramma.  The artiste plans to keep the entry fee at a low low cost of $500 and have already received all written and signed documents from the relevant authorities in keeping with the law.  Bramma will also be working along with Duhaney Park Community Centre Committee in providing food, refreshment and educational items of donation to kids in the community.  These will be presented at a Treat which will be held throughout the day of March 24, 2012 from 10am-6pm.  Promotion starts now so persons can keep monitoring the press for details or log on to websites www.bramma.com or www.newimagepromotion.com