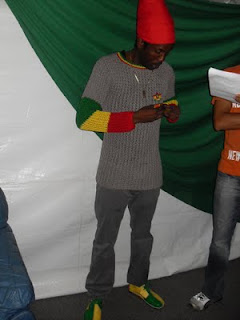 Nesbeth surprised his fans with an all time new look when he appeared at recent Reggae Sumfest held in Montego Bay; sporting a fiery red turban, a significant piece of attire worn by a group of Rastafarians known as Bobo Ashanti or Bobo Dread. Traditional Bobos are said to dress differently from all other Rastafarian group or order.  They often wear long robes and tightly wrapped turbans and their lifestyles closely emulate those of the Old Testament Jewish Mosiac law.  Meaning they observe Sabbath from sundown on Friday to sundown Saturday, consumption of salt and oil avoided among many other cultural beliefs. For the most part, Nesbeth practices and incorporates his Rastafarian beliefs in his music for the years exercising a level of maturity and responsibility to positively influence his fans.  “This is not a publicity stunt, it is an expression of how I feel about myself” explained Nesbeth.  “Wearing a turban is in keeping with my beliefs but to those who know or have seen Nesbeth before will see that it goes further than sporting dreadlocks which almost everyone else, the good, bad and indifferent is doing.”  This change for Nesbeth is spiritual, ‘a high meditation’ and he is quite comfortable singing the music he does and has no intention of switching to trend for publicity.

As it relates to his first ever performance on Reggae Sumfest, the three day festival dubbed the greatest Reggae show on Earth held in the second city, Montego Bay, Nesbeth said his performance was well received by the thousands of patrons in attendance on Dancehall Night. However he shamelessly stated that the crowd’s response did not come as a surprise to him as Reggae fans in general has always been receptive and interactive to his performance on any Jamaican stage.  So what’s next for Nesbeth?  “I have got a lot to share, a lot has happened in Jamaica today, yesterday and even last week that needs intervention.  I want to spend my time teaching, motivating or even help to find solution to some of these problems that face the youths.”

No one can deny that Macka Diamond Cowfoot song and its dance move created by popular Dancer Shelly Belly, rule the Dancehall.  The song and dance has become viral, yielding repetitive forwards and pull up in every dance/party these days.  However, in light of its popularity there is a small minority of persons who seem disappointed that the song has hit and have converged in an effort to try and derail what the people in the streets have approved.  So, the IRAWMA 2011 International Female DJ/Rapper of the Year Macka Diamond dropped another track entitled All Dem A Talk on the Kool Like Dat riddim to settle those doubts.

The lyrics come across as a feisty backlash and reminder to those who seem to forget the successes she has had in the industry over the years.  Directly responding to reports circulating in the media regarding the originality of the Cowfoot Dance, Macka deejay on the track that, "twitter is a baby" and when asked about what she really thinks about his twittering in the media she said “every upcoming artist try to attach themselves to a name fi get out deh so its nothing new, da little artist deh a do him ting.  However a Shelly Belly created the Cowfoot Dance move in Maxfield so big up Maxfield people de ting tun up loud loud”

For Macka Diamond and her crew it matters not now who created this dance move because it has become a craze among fans that literally wait until the joint is played to buss a move.  The industry however seems to think otherwise as Macka Diamond has once again been voted Female DJ of the Year and Most Outspoken Female of the Year in the Music Industry Achievers Award, the ceremony is scheduled to commence on September 27, 2011.

A Thought For Today

‘Never think that you are a loser in whatever things you do. Have the right attitude; accept whatever the outcome is with a smile in your heart. Your attitude is indeed a real success. No one is a failure till he/she fails to try.’