As it gets closer to the Christmas holiday season we are seeing a rush of events and corporate companies promotional activities coming on stream.  This of course is good for the industry at this time and even better for the artistes, some of whom have been to the brink of the crisis brought on by the recession throughout the year.  This week we witness a peace treaty between the heads of the Gully and Gaza crews both of which came under heavy criticisms and sparked much controversy among school bodies and Government ministries.   Inspite of what it was, this is indeed is a good gesture and we would like to congratulate both Vybz Kartel and Mavado for making the effort. 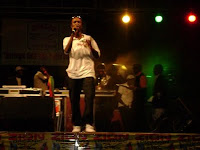 Up and coming artiste Bitta 'so sicka'  current single "Thank God its Friday T.G.I.F." is picking up momentum in the streets.   Bitta was pleasantly surprised twice last week upon hearing the song selected in a juggling in "The Building"night club and the excited reaction from the crowd when he performed it at Holy Childhood Bar-B-Que.  Thank God its Friday is an up-tempo, happy hour,  unseasonal and trendy Dancehall song produced by a group of young  prospective producers who called themselves Tremma House Records on the fittingly named, Club Banger riddim.   Bitta will be performing at Excelsior High school concert on Friday then off to Daytona, Portmore in the night.

Watching Christina Starz perform live  is exciting, the 20 year old singjay has a unique stage presence and commands her audience attention from a simple intro.  Starz has spent the past two Fridays performing on Nationwide Road shows held at Spanish Town, Papine Square and St. Willimam Grands Park Downtown, Kingston.  She unfortunately missed her time on the running order at the Tastee Talent Trail last Friday due to circumstances beyond her control but certainly made up for that at Holy Childhood Barbeque.  Christina will be making an appearance at several events leading up to and throughout the Christmas season.  This weekend she will be among the list of artistes performing on Claro Road shows at Mandella Park and Papine on Friday, Montego Bay and Trelawny on Saturday as well as  Excelsior High School concert on Friday.

I-Octane will be kept busy this weekend having a number of performances lined up throughout the corporate area as well as the production of  his own Different Page 2nd Edition event.  Different Page 2nd Edition will be held at Daytona Football Field and Headquarters in Greater Portmore this Friday December 11th, showtime is 7:00pm.   The event is free of admission charges and will showcase performances by Capleton, Sizzla, Mavado, Anthony B, Richie Spice, Etana, Jah Vinchi, Nesbeth, Etana, Gee Wizz, Laden, Chino, Blak Ryno, Stacious, Alaine, Tifa, Christina Starz, Busy Signal, Bitta, Cush Hunta and more, there will also be a kids treat in the evening hours before the event.

Octane's performance at the recent West Kingston Jamborie was  "overwhelming".    He received a resounding forward and approval from the over 20,000 strong crowd for the delivery of his  hit song "Mama you alone" produced by Management company Arrows Recording.    I-Octane will be performing on the Claro Road shows at Mandella Park and Papine on Friday, Montego Bay and Trelawny on Saturday, Magnum Road show at Junction, St. Elizabeth on December 19th, Kumba Mi Yabba at Ranny Williams on December 19, Osafa Foundation Charity show December 2oth,   Island Explosion December 24th, GT Christmas Extravaganza Christmas Day December 25th, STING 2009 December 26th, Jam Jam December 31st and Guinness 250 Anniversary New Years Eve Party at Dump Up Beach, Montego Bay.  Octane releases his Loose A Friend video on Hype TV, Thursday December 10th so keep it locked.  This artiste has come a far way with even much further to go but at this point it is evident that his future looks bright for 2010.

Nesbeth pulled his recently released "A nuh suh mi waan live" single earlier this week to remove  the word 'flipping' from the first verse of the song.   Now back in circulation,  "A nuh suh mi waan live" has already ignited  huge forwards when introduced on shows.   His performance at Tastee Talent Trail finals last weekend at Mas Camp was unforgetable and proves that his Drive By single, a Jan Biggs Production is indeed a potential international hit that has created a long standing vibe among fans and within the music sector this year.  The demand for Nesbeth's performance locally has  improved tremendously heading towards the end of the year.  Nesbeth will be performing on the Osafa Fundraising  Charity show and Reggae Fever, Saturday December 20th, Island Explosion Christmas Eve, Thursday December 24, March Out, Christmas Day, Friday December 25th and the greatest Reggae show on earth!! STING 2009.

Highlights!!!!!! In other news Bramma leaves for his 2 weeks Europe tour week and returns for his debut performance on STING 2009.   Tafari released his Hygrade Entertainment remix of Rhianna's Rude Boy single which sparked much interest among fans many of whom expressed their eagerness for a collaboration between  the two.     Reggae artiste Stanpipe is here to promote his new single and  hope to get on a few events during his stay.  Well, that's it for this week folks, until next week, do stay bless and keep safe!!!!