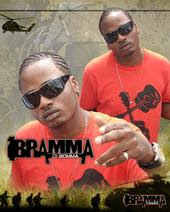 Not many people will understand how difficult it is for a young artiste to book his own tour. Touring helps to build the artiste’s repertoire and further encourage live performances. Dancehall artiste Bramma has accomplished this feat at this early stage of his career. The artiste kicked off the first leg of his tour last Thursday December 10th in Rotterdam/Netherlands at Bootleg Café. The club which houses over 250 patrons was full to capacity, Promoter Jan Haze states, “it is a small club but nice vibez and the crowd really appreciated and endorsed Bramma’s performance, the show was supported by local sounds and a local artist called lyrical’.  On Friday December 11th they were off to Paris, for another show, “Bramma draw a wicked crowd, of approximately 600 people or more” said Jan Haze “while local artiste Lyrical, Sensi Movement and 97 Connection Sounds were the support for the night”.  Bramma spent the next 2 days doing radio interviews and dub sessions in Paris.  On Monday, December 14th Bramma was back in studios to cut dubs in Rotterdam and on Tuesday, he moved on to Amsterdam for another show on DJ Waxfiend`s famous dance in the Brazil Bar complimented by 2 other radio interviews.  From Amsterdam, the 21 year old artiste travelled to Germany where he performed at Leipzig, Berlin and Hamburg. In Hamburg, Bramma is expected to perform at a party with Stonelove and sum local sounds. Bramma has come a far way since his 5 years entry into the business under the management of Sophia McKay of New Image Promotions. Three years in his career his name became a brand in many towns and cities throughout Europe but he was still unknown in Jamaica. Bramma and Sophia McKay worked hard at getting a buzz in Jamaica and it happened then it was time to get his visa which he did and now Bramma, the only Dancehall Bomma is on tour in Europe and doing well on his own….bomb dem up!!!!!

After a series of Promotional activities geared towards creating a buzz and enhancing his public image locally, Reggae artiste Stanpipe who named himself after the community he grew up called Stanpipe in Barbican is back on the island to extend the promotional campaign to encourage sale on his debut album entitle “Lifes Water” on Itunes, Rhapsody, Amazon, Napster and all Etailers worldwide. His aim is to book live performances locally and internationally by summer of 2010. Better known for his “Ghetto Youths” collaboration with Natty Remo and “Cut It Off” which got much airplay on local radio, Stanpipe expects to get just as much love locally with his collaboration with Dancehall first lady D’Angel. The single is entitle “Thank you for being a friend” and is one of the tracks taken from his album.  Stanpipe loves Dancehall music but grew up on conscious Reggae as his mother, Queen Minnie owned and operated Minnie’s Vegetarian Restaurant in Liguanea and toured with Bob Marley and the Wailers back then. Stanpipe’s dad is founder and owner of Sons Junior International base in Brooklyn New York. His uncle Cornell Chin, selector of the same sound plays an integral role in the shaping of his career.

Shaka Pow has released another single featuring Sadeke entitle “Dancers be joyful” which was created especially for the Christmas holiday season, a video for the song is already in rotation on local cable. Shaka is currently enjoying popularity in the Dancehall from his hit single “Rubba bounce” which stands out above all the Rubba bounce Dancehall tracks to include Elephant Man and RDX version of the same topic.  The Color-Color Squad recently received the “Dance of the year” award for Rubba bounce at Stonelove Anniversary which was made popular by Shaka Pow and Samboni’s version of the Rubba bounce dance. Watch the Dancehall Doc unleash a string of popular songs by him this year on STING 2009.